Talk about your perfect timing.
Two Big Pricks Thwarted by Thousands of Little Pricks Acting Together!
This story is ABSOLUTELY TRUE... with one or two small changes to protect the innocent and piss off people I don't approve of.
A pair of men who sought to violate Florida’s longstanding and well founded law against sex with porcupines found themselves almost losing their manhoods when their victim took exception to their unwanted advances.

The pair apparently sensed a challenge after reading a guidebook to some of the more bizarre and archaic Florida state laws. The express prohibition of sex with porcupines caught their attention in particular, and magnified through the bottom of a bottle of whiskey seemed an irresistible thrill.
Soon they were traipsing off into the countryside to find a porcupine to ravish. Soon they found one, and approached it for sex.
The next day the pair had sufficiently regained their senses to realize that their quill laced penises would need immediate medical attention. They boarded a plane to California, and checked into hospital as soon as they arrived.
There they were unsurprisingly diagnosed with “needles of a porcupine in genitals.”Californian doctors dryly pointed out that things could be worse: “The most positive thing about the situation is that they did not have to stand trial in Florida. They left the state just in time.”Although the pair kept their genitals relatively intact, painful inflammation meant extra treatment was necessary.
Miami-Dade Police have released these photographs of the clueless suspects...

"If you want a figurehead chairman, I'll quit." 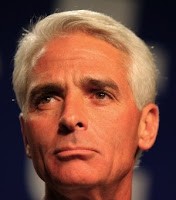 "I would have voted for the stimulus."
Posted by richard mcenroe at 7:47 PM