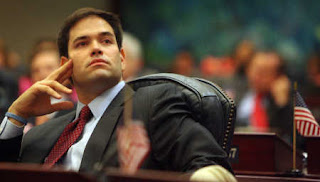 In his column today, Will writes, "In January 2011, one Floridian will leave for the U.S. Senate. He is unlikely to be a former governor at odds with his party's nominating electorate, or the probable Democratic nominee, Kendrick Meek, a hyper-liberal congressman. Rubio intends to prove that 'in the most important swing state, you can run successfully as a principled conservative.' He probably will."

Will points out that Crist has made several poor decisions for Florida; one problematic and risky one was his government run property insurance program which has "driven private insurers to limit their business or even stop doing business in the state." When the next big hurricane hits, guess who is going to be on the hook for the bill?

For his part, Rubio understands how the Republicans got in trouble in the first place. In a speech this week he criticized Republican spending during the Bush years and their misdirection with regard to real reform and conservative principles. KeysNet covered Rubio's speech in Key Largo and noted that "Rubio said neither former President George W. Bush or congressional Republicans seriously pushed for what he considers real reform measures — term limits, a simplification of the federal tax code and the elimination of the capital gains tax."

Tomorrow's St. Petersburg Times has a recap of the straw polls to date:

Making a tennis analogy, George Will referred to the NRSC's early endorsement of Crist as an "unforced error." It certainly suggests that the NRSC is as out of touch with the base as Crist seems to be if the straw polls are to be trusted.

(Cross posted at And So it Goes in Shreveport)
Posted by Pat Austin Becker at 10:13 PM 3 comments:

Michael Steele, Your Ship Is Sailing Without You... 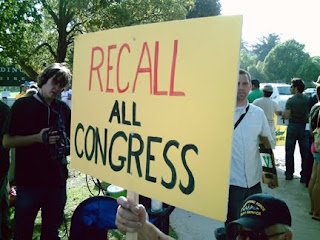 There's an Upset Brewing in Florida

From the September 13th addition of the St. Petersburg Times:

"It's rare that I talk to anyone that's got a good thing to say about the governor right now. It's hard to find a real Charlie Crist ally," said former state Republican chairman Tom Slade. "Charlie Crist is a marvelous politician, but rarely do you use the word statesman with Charlie Crist. That's his vulnerability, getting branded as another self-centered politician, and he doesn't have many more opportunities to muff up before that happens." ...

His state is losing population for the first time in 60 years. Unemployment and foreclosures are soaring. Taxes haven't dropped like a rock as he promised, and Florida remains one hurricane away from bankruptcy. County Republican parties are openly revolting against Crist, while a charismatic young rival, Marco Rubio, is being hailed on the cover of William F. Buckley's National Review magazine as the future of the GOP. ...

The polls don't show it yet, but warning signs abound for Crist. Local Republican executive committees and clubs in every corner of the state are holding symbolic "straw poll" votes where Rubio doesn't just beat Crist, but consistently trounces him 8- or 9-to-1.

Three things have brought the Florida Republican Senate race to this point.First, Charlie Crist, generally considered a (very) liberal Republican, angered the base by embracing President Obama and the president’s highly unpopular Stimulus Bill. Bad has gone to worse for the governor as unemployment has risen in the state and Crist broke his promise not raise taxes on already cash strapped Floridians.

Second, Marco Rubio showed up on the scene as Crist’s polar opposite Rubio, the former Speaker of the Florida House is a staunch conservative who fires up the base at every event he attends. In addition to his conservative credentials, he is young, photogenic and unbelievably well spoken. He connects with “the people” because he intuitively knows how to talk to people without talking down to them-a refreshing quality in a politician.

Third, in a huge miscalculation, the NRSC came out in favor of Crist right out of the gate. Sadly, many in the Republican party leadership do not seem to understand how unhappy the base is with them. By backing a candidate prior to the primary, the NRSC cemented the feeling among the base that the ‘street level’ Republican doesn’t count.

This is being played as an ‘upset in the making’ but as a member of the base, I don’t know anybody who is upset by the notion of ‘Senator Rubio.’
Posted by Carol at 9:54 PM 3 comments:

Over the course of the last few months I have had an awakening. I have always followed politics in my state of Florida, but to be honest, prior to the Stimulus Bill and Cap and Trade and the bailouts and now ObamaCare, I never spent one moment thinking about S. Dakota or Washington or any other state. I suddenly realized how important it is that I get informed and support candidates who share my values because no matter what state they represent, every single member of the United States Congress affects my life.

Yesterday I had the privledge of listenning to a speaker who has the opportunity to affect not only my life but the lives of every citizen in this country in a positive way. Every member of Congress has taken an oath to defend and be faithful to the US Constitution but once the swearing in is over, they forget their oath and defend nothing more or less than their own re-election. We can not continue to elect officials who serve only themselves. The stakes have grown too high.

Please view the following videos of Marco Rubio speaking at the Lakeland Republican Club on September 2, 2009. We need this man, and more like him, in the US Senate. I am not only asking you to support Marco, but also to find the Marco in your state and get me the information so that I may support him or her as well.

We showed yesterday that we can come together as a united voice for freedom. We can turn this country around by remaining unified in forwarding our message in one very loud voice.

At the end of the second video it refers to "part three" but I couldn't find it anywhere. If anyone does, please email me the link.

The Huffington Post takes a look at the straw polls in Florida and summarizes the results:

The Senate Guru concludes with this: "The only question is whether or not the Rubio camp's organization will be effective enough to translate this clear-cut support (and broad discontent with Crist) into a sufficiently strong grassroots army to counter Crist's fundraising advantage and Washington D.C. establishment support. If Rubio does (and I think he can), a major upset may be in the works."

Read the post for details and links to the actual polls by county.

Maybe the voters in Florida are capable of choosing their own candidate without the NRSC's help after all. Imagine that.
Posted by Pat Austin Becker at 6:27 PM 5 comments:

Thanks to John Hawkins of Right Wing News for alerting us to this Denver Post article by Lynn Bartels:

The chairman of the Colorado Republican Party says he plans to inform a national GOP group today that it created a "backlash" by registering two domain names for potential U.S. Senate candidate Jane Norton.
Dick Wadhams pointed to a rash of e-mails during the weekend among Colorado Republicans who are upset with the National Republican Senatorial Committee, which they believe is playing favorites in the crowded 2010 primary field. . . .
One e-mail was written by Le Moine Dowd and distributed by Scott Starin, chairman of the Boulder County Republican Party. The subject line reads, "Send this to every Republican you know."
She wrote that the "the endorsement of Jane Norton by the NRSC is essentially a deathblow for all other candidates."
"Do we want the NRSC deciding our candidate? Does this action by the NRSC make the primary election irrelevant? Does it make the Colorado Republican Party irrelevant?" she asked. . . .READ MORE HERE

Also be sure to read the rest of the column where John Hawkins explains that the NRSC has also been meddling in the California GOP primary.

Any reader in Colorado wondering "what can I do?" should phone the Colorado State GOP at (303) 758-3333 or send an e-mail to State Party Chairman Dick Wadhams. Tell the state party officials you support their stand against the NRSC's illegitimate interference in Republican primaries.

The entire point of NOT ONE RED CENT is to defend the right of Republican grassroots voters to choose their own candidates without being stomped on by the clueless idiots at GOP-HQ in Washington who have been running the Republican Party into the ground. Don't let anybody in D.C. tell you who to vote for.

However, it's about time conservative grassroots asked themselves whether the NRSC's support of any Republican candidate in a contested primary should be considered the political Kiss Of Death. Hasta la vista, Jane Norton!
Posted by Robert Stacy McCain at 1:24 PM 2 comments: