Cornyn to conservatives: Screw you!

The NRSC Chairman says it is not "realistic" to try to elect conservatives to the Senate:

Sen. John Cornyn (Texas), the chairman of the National Republican Senatorial Committee (NRSC), suggested that conservatives need to have a more realistic sense of which races are winnable and with which candidates.
"Folks on the right . . . have to yield to the world as it is and not necessarily how they wish it would be," Cornyn told Reuters for a story about centrist Rep. Mike Castle's (R) bid for Senate next year in Delaware.

But Florida is not Delaware, is it, Senator? With 2010 shaping up as a good year for Republicans, the candidate with the "R" beside his name is a contender, and in every single race where the NRSC's influence has been exercised, it has favored bland "moderates" like Castle, a worthless fossil from the Gerald Ford era.

It's the same deal in California and Florida, and also in Nevada, where the "establishment" candidate is the former GOP state chairwoman whose chief achievement is running the state party into the ground. By backing the failed politics and failed politicians of yesterday, the NRSC is forfeiting the future.
Posted by Robert Stacy McCain at 3:03 AM 6 comments:

Will Charlie Fall Down, Go Boom? 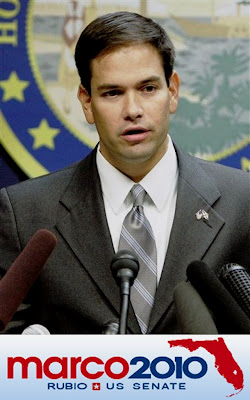 As we rush head-long into what appears to be a “Harry Christmas”, it seems the worm is turning in Florida’s U.S. Senate race. To wit:
In a move that may deal a significant blow to the governor’s campaign, Lincoln and Mario Diaz-Balart have pulled their endorsement of Florida Governor Charlie Crist. Crist’s poll numbers have been slipping badly.
"We take our endorsements seriously, but the governor knows why we withdrew and he left us with no alternative,' Lincoln Diaz-Balart said.
There is heavy speculation that they are unhappy with a number of Crist’s recent policy decisions and a suggestion that Crist would be weak on Cuban policy. That last bit is a huge issue in South Florida. Lincoln Diaz-Balart has represented Florida's 21st District since 1992, which at 71%, has the highest Latino population in the state. Mario Rubio has represented the 25th District, with a 67% Latino population, since 1992.
For the moment, at least, it seems the Diaz-Balart brothers have no intention of officially throwing their support behind Crist’s primary challenger, former Florida State House Speaker Marco Rubio, who has been gaining steam among conservatives. But you have to wonder whether publicly retracting support for Crist amounts to the same thing.
Via Memeorandum
Posted by No Sheeples Here
Posted by No Sheeples Here! at 9:11 PM 2 comments: 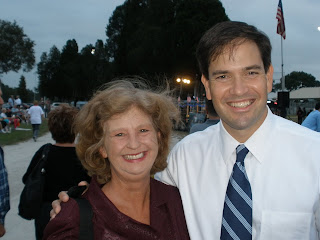 An enthusiastic crowd met in Plant City today to listen to Willie Lawson of BlogTalk Radio, Dr, Gonzalez-Orthopedic Surgeon and Marco Rubio, who will be facing Gov. Charlie Crist in the Republican primary race for the US Senate. 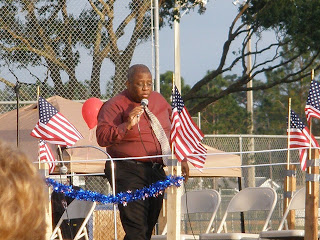 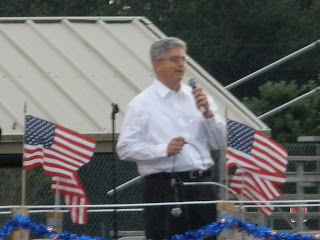 Lawson, active in the local Tea Party, warmed the crowd up and Dr. Gonzalez spoke passionately about the need to stop the Democrats from passing their version of health care reform. The crowd broke out in cheers when Dr. Gonzalez reported that Sen. Bernie Sanders had withdrawn his "single payer" amendment today after Sen. Tom Coburn forced a reading of the 767 page amendment. Both speakers noted the importance of voting for a conservative candidate rather than a "Dem lite" in the August Republican primary. There were no names mentioned but it was clear that Rubio was considered the conservative candidate. 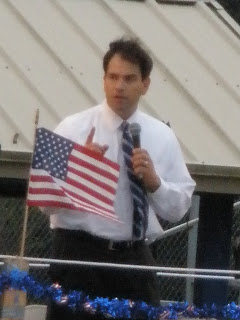 Rubio received a standing ovation when he took the stage. His message of personal and fiscal responsibility plays well across Florida and particularly resonates in Plant City, a small mostly rural community. After speaking, Rubio mingled with crowd answering questions and having his picture taken.

No one in this crowd was surprised that Rubio had tied Crist in the most recent Rasmussen poll-he was obviously their choice. 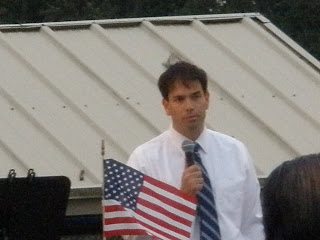 Cross posted at Carol's Closet
Posted by Carol at 8:14 PM No comments:

RINO in Our Sights!

There's a lesson here for the NRSC. Something about pearls before swine.

At this rate, Crist might be Scozzafavaed by March of next year. One can only hope, at least.

David Frum called, he was crying about a big tent or something.
Posted by Dave C at 8:38 PM No comments:

Few men alive have done more to build the American conservative movement than direct-mail fundraising pioneer Richard Viguerie. In recent years, Viguerie has applied his Old School savvy to New Media, with major online and e-mail operations. Obviously, he's not afraid to be controversial in the blogosphere:

While well intentioned, the litmus test proposal would do little to solve the two fundamental problems within the Republican Party: bad leadership and conservative acquiescence to bad leadership.
RINOs such as Dede Scozzafava and Florida Governor Charlie Crist aren’t the real issue. Scozzafava, Crist, and others who rightly deserve the “RINO” tag are merely an annoyance. Besides irritating their fellow Republicans with their liberalism, RINOs haven’t really had a great deal of impact on the direction of Republican party policies over the past decade.
The current Republican leadership has consistently supported our national slide to socialism. I’m talking about Senate Minority Leader Mitch McConnell, House Minority Leader John Boehner, and the leading architect of Republican endorsed socialist-statism, former Bush White House political advisor Karl Rove. . . .
National conservatives who want to fix the Republican Party shouldn't waste their time forcing symbolic litmus test votes on the Republican National Committee. Instead, they should consider focusing their considerable energies on solving the real problem. Now is the time to put new leaders at the helm of the House, the Senate, the RNC, the NRCC, and the NRSC.
A litmus test is only as good as the character of the person who endorses it. It's easy for professional politicians to say they support something in order to pass a test that gives them access to campaign cash. The more important test is true devotion to the limited government principles embodied in our Constitution. . . .

Read the whole thing. Whether you agree or disagree, Viguerie is not a man whose opinions can be taken lightly.
Posted by Robert Stacy McCain at 5:50 PM 1 comment: