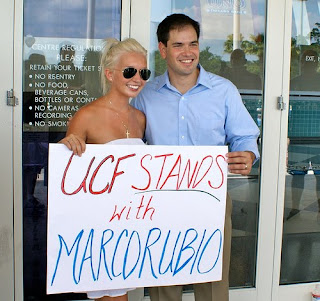 Via Memeorandum: From The St. Pete Times:

Charlie Crist ought to start worrying. The Marco Rubio campaign says the underdog Republican candidate for U.S. Senate raised nearly $1 million in the last fundraising quarter — a giant improvement over his last quarter and a number sure to help eliminate doubts about his viability.

"It says to me that Marco Rubio is going to be the next senator from Florida, and it should say to a lot of other people that Marco Rubio is a very, very formidable candidate," said senior adviser Pat Shortridge, who did not have an estimate on how much money Rubio has on hand.

Charlie Crist has not yet released a number, but supporters are speculating he will raise at least $2 million. of course, the last time Crist allies floated a number like that he reported raising more than $4 million.

Who needs the stinkin' NRSC anyway? Not Rubio.