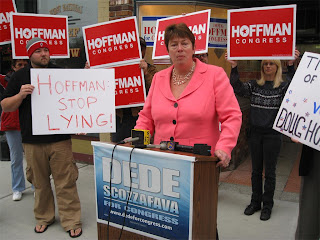 I've spent the morning running scans on my desktop in an attempt to rid it of an intrusive trojan/virus. Then comes word that Dede quits NY-23. Oh the irony.

Robert Stacy McCain is on scene and broke the news, at least, that's how I found out. This is exciting stuff! Who would have thought that a small special election in upstate New York would have turned into such a referendum on the GOP, RNC, NRCC and, well, Newt.

Professor Jacobson is calling it an all out referendum on Obama now. Liberals vs. conservatives.

The talk on Twitter is sort of cautious; some are hesitant to get too excited just yet. Part of that is because Scozzafava was such a liberal some of her voters may go to Hoffman. The last poll had it a dead heat with Hoffman and Owens with Dede a distant third.

Hot Air reports that Hoffman supporters are headed to Scozzafava's campaign to seek her endorsement. Heh. She's so far left, I'm not even sure that's a good idea.

(Cross posted at And So it Goes in Shreveport)