Crist Gets the Money, Rubio Gets the Votes 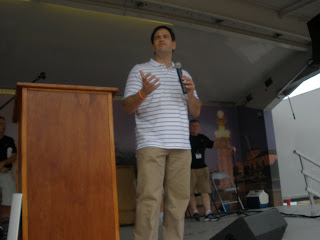 Fresh on Memorandum is this report from The Hill, Gov. Crist and Freedom's Watch funder plan to fundraise together:

Florida Gov. Charlie Crist will head to Las Vegas at the end of the month for a well-backed, high-priced fundraiser with perhaps the Republican Party's wealthiest donor.

Crist will benefit from a fundraiser at the Palazzo Hotel and Casino, one of the newest casinos on the Las Vegas Strip, on Oct. 29. His host, Las Vegas Sands Corp. CEO Sheldon Adelson, is the 26th-richest man in America, according to Forbes magazine.

Adelson funded the conservative group Freedom's Watch during the 2008 campaign, spending millions of dollars to attack then-Sen. Barack Obama (D-Ill.) and Democratic candidates up and down the ballot.

But the economic downturn hit Las Vegas and the tourism industry hard, and Adelson lost $24 billion — reportedly more than any other single American. He has since quit politics, and Freedom's Watch folded.

This is a case of throwing perfectly good money after bad. Very bad. While it is undeniable that it is better to have too much money when running a campaign than not enough, ultimately, it is the voters who matter. How poorly is Crist doing with the voters? From Senate Guru:

This has been Charlie Crist's summer, getting crushed by Marco Rubio time and
time again and facing rebuke after rebuke by Republicans at the local level. To
recap:

Let’s be blunt-Floridians don’t like Charlie Crist. Crist burned his bridges when he embraced President Obama and accepted the Stimulus dollars. Florida unemployment is currently at 10.9% a full two points higher than it was in January and six points higher than it was in April of last year. With ten of thousands of Florida families hurting how has Crist responded? He broke his promise not to raise taxes.

Crist should enjoy his time at the Palazzo. While he is hanging out in Vegas, Rubio will be traveling Florida shoring up the vote.