Rove Writes a Check to Rubio 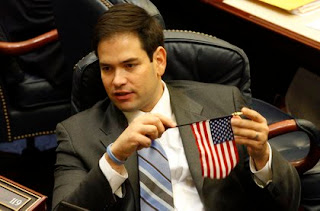 "While Crist has financially overwhelmed Rubio to date, there are many Republicans -- particularly those in Flordia that are close to former GOP Gov. Jeb Bush -- who have publicly become more comfortable airing their skepticism about Crist in public. One of those Republicans with close ties to the Bush family, Karl Rove, has signaled his preference with his wallet. Rove confirms to NBC News that he has contributed a $1000 to Rubio's campaign, the donation will be made public when Rubio files his next FEC report (due Oct. 15). "

Will an endorsement from Rove help Rubio's momentum? We shall see. Some see Rove's endorsement as a vicarious endorsement from Jeb Bush who hasn't come out for anyone. Jeb is walking the tightrope not wanting to alienate either of them. Jeb has the same problem that the NRSC has in that Crist is "the favorite" so let's just go with him - never mind what he stands for. Rove's endorsement, or support, could be a silent nod from Jeb, at least, that's the way Ben Smith at Politico is reading it.

The Tampa Bay Buzz at the St. Pete Times is reporting that Rubio has earned over $600,000 this quarter which is enough to keep him going.

(Cross posted at And So it Goes in Shreveport)
Posted by Pat Austin Becker at 5:15 PM