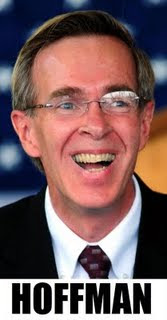 Jumpin' jehosaphat! Have you seen the latest Daily Kos poll on NY-23? Here's the summary:

and the breakdown is here. That's quite a jump for Doug Hoffman, and I might note, quite a fall for Dede. The poll was conducted from October 26 to October 28 so it would reflect the Palin endorsement. Governor Rick Perry now joins the lineup of those who have endorsed Hoffman along with Minnesota Gov. Tim Pawlenty, former House Majority Leader Dick Armey, Fred Thompson and Rick Santorum, among others.

Allahpundit notes the poll with the reminder that this isn't actually a Daily Kos poll - they just paid for it. The pollster, Research 2000 is reliable. In addition, he says "Remember too that the campaigns have been whispering for the past week that internal polls show a two-man race now with Scozzafava fading. Consider this confirmation."

The end is near: Hoffman, Scozzafava and Democrat Owens will debate tonight; election day is Tuesday. Stacy McCain is doing the road-trip-thing, on his way to Syracuse as we speak. I believe you'll be able to watch tonight's debate online.

It's not too late to send some cash Hoffman's way so he can keep the momentum! As Robert Stacy McCain says, it's HOFFMANIA!

(Cross-posted at And So it Goes in Shreveport)
Posted by Pat Austin Becker at 4:39 PM