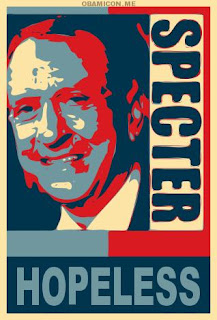 Once you've proven you can't be trusted, not even becoming a Democrat can save your hopless RINO butt:

Sen. Arlen Specter continues to pick up support from Democratic party leaders across Pennsylvania. However, a new poll indicates that the five-term incumbent has not convinced a majority of Pennsylvania voters that he should be re-elected.
According to a new Franklin & Marshall poll released Thursday, only 28 percent of registered voters in Pennsylvania think Specter should be re-elected.
That number is down from 40 percent in March, a month before Specter's "conversion" to the Democratic Party. . . . The poll also showed that Specter's "excellent" or "good" job approval rating declined from 52 percent in March to 34 percent in June.

Specter's new Democratic "friends" will repay the selfish crapweasel for his treachery -- he'll lose to Sestak in the primary -- and meanwhile, conservatives will unite behind Pat Toomey.
Posted by Robert Stacy McCain at 4:13 PM