It Couldn't Happen to a Nicer Guy 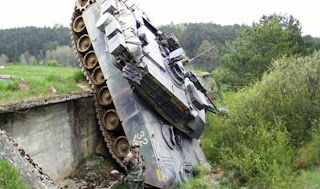 Gee, it can't be a good thing when a picture of a tipped tank is used to illustrate a politician's career, but hey, in this case, it couldn't happen to a nicer guy.

According to FitNews.Com Sen. Lindsey Graham's popularity is tanking in South Carolina. He's not only losing the confidence of Republican voters, he's also in a freefall with the all important Independent voters. Pardon me for a moment while I snicker.

Graham served in the House from 1995 to 2003 when he moved on to the Senate. At some point during the last fourteen years he decided as an incumbent he was a) in like Flynn and as a result b) his constituents could go to Hell. Apparently, his constituents disagree.

U.S. Sen. Lindsey Graham’s public support is collapsing in South Carolina – driven by a wholesale revolt among the GOP electorate and a steady erosion of his support amongst independents.

Already consistently loathed by a solid third of GOP voters, Graham’s recent leftward bent – including his co-authoring of a controversial “Cap & Tax” proposal supported by President Barack Obama and liberal Sen. John Kerry (D-Mass.) – has him locked in a “terminal free fall,” according one prominent Republican consultant.

“A chunk of the GOP has always detested him, but in the last month a damn has broken,” said the consultant, who was granted anonymity to discuss the impact of two recent polls that were conducted in South Carolina (one allegedly by Graham’s own advisors). “More Republicans now oppose Sen. Graham than support him. Independents are also deserting him in huge numbers.”

So who is backing Graham? According to FITS, he's being back by the Truman National Security Project a liberal front group aimed at training “progressives” in their efforts to co-opt the debate over national security, which is typically one of the GOP’s bread-and-butter issues.

Just recently I've taken to including a small picture of pink flip flops to symbolize Crist on my posts relating to him. My bet is that Graham will be doing a flip flop of his own soon. Maybe I can find a green pair for Graham to symbolize his support for Cap & Trade.

Cross posted at Carol's Closet
Posted by Carol at 4:03 PM