Is Charlie Starting to Choke? 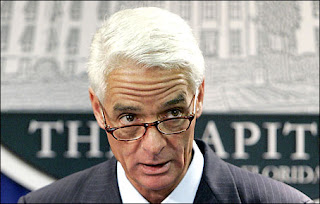 Josh Kraushaar at Politico says Crist is "panicking about his Florida Senate primary against Marco Rubio" and goes on to list a number of nasty nettles in the Crist campaign, the first of which is the firing by Crist of his longtime communications director Erin Isaac.

If that weren't enough to make Crist crazy, the Miami Herald Sun Sentinel has a front page story on the Scott Rothstein, one of Crist's largest financial backers, who is now in trouble with a Ponzi scheme. Robert Stacy McCain posted about that on this blog days ago.

If that weren't enough, Crist is now acting as his own press secretary:

In terms of press coverage lately, Crist has been having a bad stretch -- largely of his own doing. (The stimulus support he insists he never gave, Obama man-hug tape notwithstanding; his insistence he didn't know Obama's recent Florida itinerary; the uproar over an anti-Rubio Web site that had the participation of an RPOF paid consultant; and public floggings by former press buddies Wolf Blitzer and Chris Matthews, etc.)

Crist also lately has been acting as his own press secretary -- calling the Times' Adam Smith to set up an interview on Political Connections, and arranging the Times' recent interview in Gainesville with himself and first lady Carole Crist. The governor also recently instructed reporters to call his cell phone directly -- rather than using a "go-between" in the press office.

It's way WAY too early for a victory dance, but I'd say Charlie has some problems.

Update: Commeter spoutinghorn thankfully corrects me on the now mythic Miami Herald Sun Sentinel. I, of course, meant two different papers. I had too many windows open and not enough brain-power open. My mistake and thanks for the correction!

(Cross posted at And So it Goes in Shreveport)
Posted by Pat Austin Becker at 5:50 PM