Crist Campaign Cracks Up in Florida 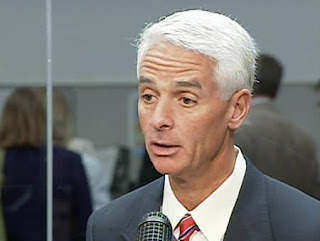 What in the world is going on with Charlie Crist?  I've all but blown him off as irrelevant in the past few weeks as Rubio has surged past him in the polls, but now with Crist's "dithering" and odd behavior regarding his status in the race, one can't help but notice.  Maybe that's his intent.

Larry Thornberry at American Spectator has been keeping an eye on Crist while I've had my head turned and posts a great piece this morning:


Well, there are promises and there are Charlie Crist promises. After two years of most un-Republican-like behavior, Crist appears to be on a path to making the obvious official by leaving the Republican Party. Finding himself behind Rubio by between 11 and 32 points, depending on which recent poll he consulted, for the Republican nomination for the Senate seat Mel Martinez resigned from last summer, Crist is left with the options of admitting defeat and withdrawing from the race or running as an independent. He has until the April 30 filing deadline to decide.

That's the big question right now:  will Crist run as an independent, a Republican, or drop out altogether.  It's interesting that nobody seems to really trust what Crist says.  Even though he has said countless times that he'll run as a Republican, who really believes that?

The Wall Street Journal reports that Crist is already laying the groundwork for an independent run:

Several advisers to Mr. Crist say the governor believes that an independent candidacy is his only chance to win the Senate seat. He is moving closer to deciding to take that course, they say, but still has qualms about leaving the GOP.


Crist's campaign against Rubio has been primarily one of character assassination because even Crist knows he can't beat Rubio on the issues.  Met with disdain from Republicans, Crist has now pulled his attack ads against Rubio in some Florida markets.

The entire boondoggle gets even more complicated today as we get word that the Feds are now investigating Rubio and two of Crist's advisers regarding the use of party credit cards.


Ed Morrissey at Hot Air points out that Rubio has the most to lose in this investigation:

Obviously, Rubio has the most to lose. Not only is he the front runner in this race, but he’s the one candidate whose name has been attached to the scandal. Running on a Tea Party platform of government reform and accountability, Rubio also has the most to lose in terms of public perception.


I would contend that is stating the obvious.  Rubio has already addressed this issue publicly and paid back the funds in question.

And, really, what does Crist have to lose at this point?

Cross posted at And So it Goes in Shreveport
Posted by Pat Austin Becker at 10:52 AM