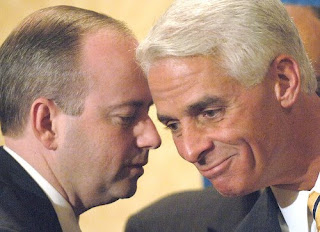 Via The Weekly Standard, here is Marco Rubio's statement about Charlie Crist's appointment of George LeMieux to fill the vacant Mel Martinez seat:

"This is a disappointing appointment for Florida. George LeMieux is a talented political operative and the governor's best friend, but that doesn't make him the right choice to represent Florida in the Senate. Governor Crist had a wealth of consistent and principled conservative candidates to choose from, all of whom would have been a reliable check and balance on the excesses of the Obama-Pelosi-Reid agenda."

The Miami Herald quotes mixed reactions around the state to the appointment.

The St. Petersburg Times has a report of LeMieux on the issues; well, how he felt in 1998 at least. Then, he supported gay adoption and same-sex benefits but thinks gay marriage should be left up to the voters. He opposes drilling off Florida's coast. He says as a Catholic he opposes abortion except in "limited circumstances" and supports the right to bear arms but thinks that the waiting period to buy guns should be the same at gun shows as it is at gun shops.

LeMieux has served as Crist's deputy attorney general, he ran Crist's campaign for governor, and was Crist's first chief of staff as governor. LeMieux describes himself as "a Crist Republican" which means "The Charlie Crist way of staying with your principles but still trying to solve problems for the people is the way that we need to address things in Washington."

As such a good friend of Crist's, it's probably safe to assume that LeMieux has no interest in running for the seat permanently which brings it back to Crist/Rubio. And Rubio is looking better and better all the time.
Posted by Pat Austin Becker at 7:30 PM